Finding steps beneath the noise

The problem of noise removal from signals (a signal is just a sequence of measurements of some quantity like a wind speed or stock price) which are secretly composed of steps is surprisingly common and important, and arises in a host of disciplines, including analysis of drill hole data in exploration geophysics, detecting DNA copy-number ratios in genomics, and separating out molecular dynamics from background noise. In each case one seeks to filter away the fluctuations in one's signal to leave behind the steps one believes are contained within.
Our recent papers with the glamourous titles Generalized methods and solvers for noise removal from piecewise constant signals I. Background theory and II New Methods (articles free online), which appeared in the Proceedings of the Royal Society A, introduced a new mathematical framework for the problem, and, as special cases of this framework, developed some new signal processing algorithms to address the problem. The study of this task has been very fragmented across disciplines (from geoscience to physics to biology) so one of our major goals was to present a synthesis of existing work which would expose natural developments. For example having performed our synthesis we presented a particularly simple new method called "robust jump penalization", that exhaustively tests for the location of a new step when the noise is not from a normal or Gaussian distribution while subject to the constraint that the number of jumps should be small. Max and Nick
at July 19, 2011 No comments:

Bringing the dance steps of molecular motors into focus 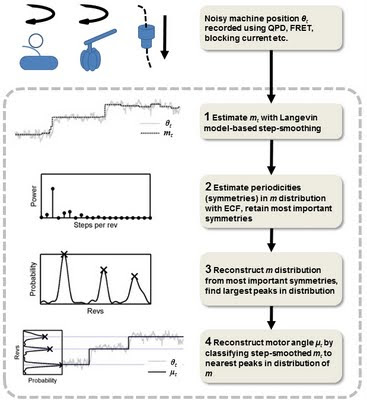 We're all familiar with the behaviour of objects at everyday sizes: if they are heavy, they stay put due to friction, and it's difficult to get them to move anywhere quickly unless you use a lot of force. If instead they are very light, then they can get smoothly carried around on air currents like a feather. That's just a couple of intuitive analogies that don't work at all at the molecular scale! Down inside the workings of cells, at the scale of molecules, everything is constantly buzzing around due to thermal effects and collisions with other molecules scramble up the motion. So simply scaling down our everyday machines might not be the best way to function in this noisy environment. Yet, life is not just a mash of molecules: there are exquisite mechanisms inside cells for doing things (fairly) reliably and repeatably. This includes the rather amazing bacterial flagellar rotary motor that cells use to propel themselves towards their food (fun cartoon of its assembly). It has long been hypothesised that the motor action has to be made in lots of tiny little steps, because this is the only way for a molecular scale machine to efficiently use the available (free) energy to work against the thermal noise that wants to dissipate any organized motion.

Biological physicists (like Richard Berry and his team) are intently interested in understanding exactly how this stepping motor works, and they have recently been able to develop the instrumentation to start answering these kinds of questions. Our group is interested in how life deals with fluctuations so we were very interested in their work. Note that you can't use microscopy techniques like conventional electron microscopy, because you have to kill the cell in order to image it. Then you have no chance of seeing the motor in action.

Because of the jostling microscopic environment the data produced by these new systems can be very noisy. We developed statistical methods that tried to separate out the physics we did know (aspects of mechanics and thermal noise) from the biological physics we didn't (how the motors actually steps between successive molecular configurations). This is where statistical modelling comes in: it turns out that the problem of separating step-like motion from the noise in the data so you can image the step-like motion is difficult unless you invoke non-traditional signal processing methods. You also need to take account of the experimental apparatus that introduces some unavoidable lag into the system (Richard's team attaches a tiny bead to the flagellum and tracks this bead). In our soon-to-be-published Biophysical Journal paper "Steps and bumps: precision extraction of discrete states of molecular machines using physically-based, high-throughput time series analysis" (you'll find a pre-print on our publications page), we also introduced a novel technique based on a kind of probabilistic periodicity detection, for teasing out the cylindrical arrangement of proteins that make up the main structure of the motor, which gives the motor a characteristic set of "dance steps". Max and Nick
at July 06, 2011 No comments: 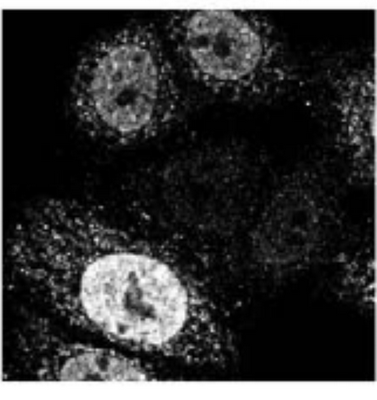 Cells make stuff and they need power to do this. But what would happen if their power stations were as variable as wind power? Presumably you'd expect that, for cells with a lower average supply of power, they would make stuff (e.g. proteins and protein precursors called RNA transcripts) more slowly and take longer to go forth and multiply (move through their cell cycle). Since you'd imagine that these consequences of power supply variability would be as disadvantageous for the cell as power-cuts for us, I would have guessed that this kind of variability in power would be tightly controlled by the cell. Seems maybe not.
Francisco Iborra now at the Centro Nacional de Biotecnologica in Madrid came to me with some startling data that he had been producing, along with his student Ricardo Neves (now at Biocant in Portugal) and others at the Weatherall Institute for Molecular Medicine. It suggested that maybe cells do show a form of marked power variability: some cells appear to be making gene products faster than others (the picture shows variability in the rate at which gene transcripts are made between cells - each cell's nucleus is the circular blob) and this is related to measures of their mitochondrial content (the number of power stations they have). The cells with more mitochondria at birth also appear to divide sooner than more disadvantaged siblings. The paper "Connecting Variability in Global Transcription Rate to Mitochondrial Variability" can be found on our papers page and appeared in PLoS Biology. Becky Ward it takes 30 - was nice enough to blog interestingly about it (she's worth following).
This might seem like a curiosity, but the fact that some cells differ from others can be very important. While we tailor our treatments of sets of cells, like cancers, to typical cells - maybe cells which, by chance, are very atypical (e.g. lazy and power limited) will respond in a very different way. You only need a few such unusual cells to survive your treatment and they'll repopulate your cancer. In fact the study of cellular variability and its origins is now a major field driven by fun researchers like t h e s e. It's still not very clear why two genes in the same organism might co-vary in the levels of their gene products (called extrinsic noise) and our paper makes an experimental contribution to this: we've just finished a paper which combines a mathematical model plus some more experiments to help illuminate our findings further. Nick
at July 01, 2011 No comments: