How cells adapt to progressive increase in mitochondrial mutation

Mitochondria produce the cell's major energy currency: ATP. If mitochondria become dysfunctional, this can be associated with a variety of devastating diseases, from Parkinson's disease to cancer. Technological advances have allowed us to generate huge volumes of data about these diseases. However, it can be a challenge to turn these large, complicated, datasets into basic understanding of how these diseases work, so that we can come up with rational treatments.

We were interested in a dataset (see here) which measured what happened to cells as their mitochondria became progressively more dysfunctional. A typical cell has roughly 1000 copies of mitochondrial DNA (mtDNA), which contains information on how to build some of the most important parts of the machinery responsible for making ATP in your cells. When mitochondrial DNA becomes mutated, these instructions accumulate errors, preventing the cell's energy machinery from working properly. Since your cells each contain about 1000 copies of mitochondrial DNA, it is interesting to think about what happens to a cell as the fraction of mutated mitochondrial DNA (called 'heteroplasmy') gradually increases.  We used maths to try and explain how a cell attempts to cope with increasing levels of heteroplasmy, resulting in a wealth of hypotheses which we hope to explore experimentally in the future. 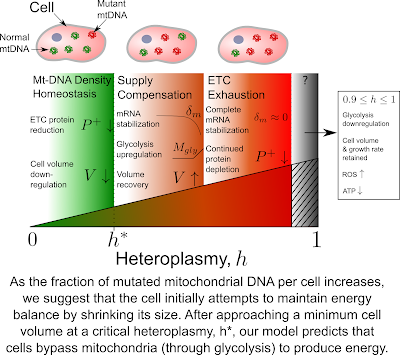 The central idea arising from our analysis of this large dataset is that cells seem to attempt to maintain the number of normal mtDNAs per cell volume as heteroplasmy initially increases from 0% mutant. We suggest they do this by shrinking their size. By getting smaller, cells are able to reduce their energy demands as the fraction of mutant mtDNA increases, allowing them to balance their energy budget and maintain energy supply = demand. However, cells can only get so small and eventually the cell must change its strategy. At a critical fraction of mutated mtDNA (h* in the cartoon above), we suggest that cells switch on an alternative energy production mode called glycolysis. This causes energy supply to increase, and as a result, cells grow larger in size again. These ideas, as well as experimental proposals to test them, are freely available in the Biochemical Journal "Mitochondrial DNA Density Homeostasis Accounts for a Threshold Effect in a Cybrid Model of a Human Mitochondrial Disease". Juvid, Iain and Nick
at January 08, 2018 No comments: