Mitochondrial DNA (mtDNA) contains instructions for building important cellular machines. We have populations of mtDNA inside each of our cells -- almost like a population of animals in an ecosystem. Indeed, mitochondria were originally independent organisms, that billions of years ago were engulfed by our ancestor's cells and survived -- so the picture of mtDNA as a population of critters living inside our cells has evolutionary precedent! MtDNA molecules replicate and degrade in our cells in response to signals passed back and forth between mitochondria and the nucleus (the cell's "control tower"). Describing the behaviour of these population given the random, noisy environment of the cell, the fact that cells divide, and the complicated nuclear signals governing mtDNA populations, is challenging. At the same time, experiments looking in detail at mtDNA inside cells are difficult -- so predictive theoretical descriptions of these populations are highly valuable.

Why should we care about these cellular populations? MtDNA can become mutated, wrecking the instructions for building machines. If a high enough proportion of mtDNAs in a cell are mutated, our cells struggle and we get diseases. It only takes a few cells exceeding this "threshold" to cause problems -- so understanding the cell-to-cell distribution of mtDNA is medically important (as well as biologically fascinating). Simple mathematical approaches typically describe only average behaviours -- we need to describe the variability in mtDNA populations too. And for that, we need to account for the random effects that influence them.


In the past, we have used a branch of maths called stochastic processes to answer questions about the random behaviour of mtDNA populations. But these previous approaches cannot account for the "control tower" -- the nucleus' control of mtDNA. To address this, we've developed a mathematical tradeoff -- we make a particular assumption (which we show not to be unreasonable) and in exchange are able to derive a wealth of results about mtDNA behaviour under all sorts of different nuclear control signals. Technically, we use a rather magical-sounding tool called "Van Kampen's system size expansion" to approximate mtDNA behaviour, then explore how the resulting equations behave as time progresses and cells divide.

Our approach shows that the cell-to-cell variability in heteroplasmy (the potentially damaging proportion of mutants in a cell) generally increases with time, and surprisingly does so in the same way regardless of how the control tower signals the population. We're able to update a decades-old and commonly-used expression (often called the Wright formula) for describing heteroplasmy variance, so that the formula, instead of being rather abstract and hard to interpret, is directly linked to real biological quantities. We also show that control tower attempts to decrease mutant mtDNA can induce more variability in the remaining "normal" mtDNA population. We link these and other results to biological applications, and show that our approach unifies and generalises many previous models and treatments of mtDNA -- providing a consistent and powerful theoretical platform with which to understand cellular mtDNA populations. The article is in the American Journal of Human Genetics here and a preprint version can be viewed here. Crossed from here.

The largest survey of opinions on vaccine confidence

Monitoring trust in immunisation programmes is essential if we are to identify areas and socioeconomic groups that are prone to vaccine-scepticism, and also if we are to forecast these levels of mistrust. Identification of vaccine-sceptic groups is especially important as clustering of non-vaccinators in social networks can serve to disproportionately lower the required vaccination levels for collective (or herd) immunity. To investigate these regions and socioeconomic groups, we performed a large-scale, data-driven study on attitudes towards vaccination. The survey — which we believe to be the largest on attitudes to vaccinations to date with responses from 67,000 people from 67 countries — was conducted by WIN Gallup International Association and probed respondents’ vaccine views by asking them to rate their agreement with the following statements: “vaccines are important for children to have”; “overall I think vaccines are safe”; “overall I think vaccines are effective”; and “vaccines are compatible with my religious beliefs”.Our results show that attitudes vary by country, socioeconomic group, and between survey questions (where respondents are more likely to agree that vaccines are important than safe). Vaccine-safety related sentiment is particularly low in the European region, which has seven of the ten least confident countries, including France, where 41% of respondents disagree that vaccines are safe. Interestingly, the oldest age group — who may have been more exposed to the havoc that vaccine-preventable diseases can cause — hold more positive views on vaccines than the young, highlighting the association between perceived danger and pro-vaccine views. Education also plays a role. Individuals with higher levels of education are more likely to view vaccines as important and effective, but higher levels of education appear not to influence views on vaccine safety.

Our study, "The State of Vaccine Confidence 2016: Global Insights Through a 67-Country Survey" can be read for free in the journal EBioMedicine here with a commentary here. You can find other treatments in Science magazine, New Scientist, Financial Times, Le Monde and Scientific American. Alex, Iain, and Nick.
at November 24, 2016 2 comments:

Understanding the strength and correlates of immunisation programmes

Childhood vaccinations are vital for the protection of children against dreadful diseases such as measles, polio, and diphtheria. In addition to providing personal protection, vaccines can also suppress epidemic outbreaks if a sufficiently large proportion of the population has immunity status – this “herd immunity” is important for society as many individuals are unable to vaccinate for medical reasons. Over the past half a century, public health organisations have made concerted efforts to vaccinate every child worldwide. However, notwithstanding the substantial improvements to vaccine coverage rates across the globe over the past few decades, there are still millions of unvaccinated children worldwide. The majority of these children live in countries where large numbers of the populations live in deprived, rural regions with poor access to healthcare. However, a number of children are denied vaccines because of parental attitudes and beliefs (which are often influenced by the media, religious groups, or anti-vaccination groups) – such hesitancy has been responsible for recent outbreaks in developing (e.g. Nigeria, Pakistan, Afghanistan) and developed (e.g. USA, UK) countries alike. Monitoring vaccine coverage rates, summarising recent vaccination behaviours, and understanding the factors which drive vaccination behaviour are thus key to our understanding vaccine acceptance, and can allow immunisation programmes to be more effectively tailored. 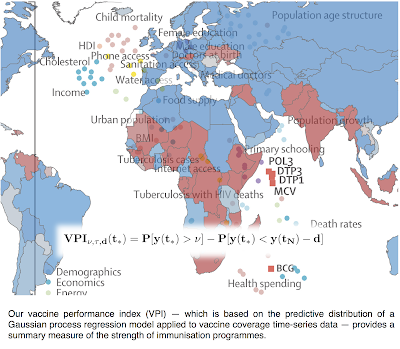 To understand these pertinent issues, we used machine learning tools on publicly-available vaccination and socioeconomic data (which can be found here  and the World Health Organization’s websites). We used Gaussian process regression to forecast vaccine coverage rates and used the predictive distributions over forecasted coverage rates to introduce a quantitative marker summarising a country’s recent vaccination trends and variability:  this summary is termed the Vaccine Performance Index. Parameterisations of this index can then be used to identify countries which are likely (over next few years) to have vaccine coverage rates far from those required for herd immunity levels or that are displaying worrying declines in rates and to assess which countries will miss immunisation goals set by global public health bodies. We find that these poorly-performing countries were mostly located in South-East Asia and sub-Saharan Africa though, surprisingly, a handful of European countries also perform poorly.


To investigate the factors associated with vaccination coverage, we sought links between socioeconomic factors with vaccine coverage and found that countries with higher levels of births attended by skilled health staff, gross domestic product, government health spending, and higher education levels have higher vaccination coverage levels (though these results are region-dependent).

Our vaccine performance index could aid policy makers’ assessments of the strength and resilience of immunisation programmes. Further,  identification of socioeconomic correlates of vaccine coverage points to factors to address to improve vaccination coverage. You can read further in our freely available paper – which is in collaboration with the London School of Hygiene and Tropical Medicine (Heidi Larson and David Smith) and IIT Delhi (Sumeet Agarwal) – in the open-access journal Lancet Global Health under the title “Forecasted trends in vaccination coverage and correlations with socioeconomic factors: a global time-series analysis over 30 years” and there is another free article unpacking it under the title "Global Trends in Vaccination Coverage". Alex, Iain, Nick.

Fungi are ubiquitous and ecologically important organisms that grow over the resources they consume. Fungi decompose everything from dead trees to dung, but whatever substrate they consume, fungi are obliged to spend energy on growth, reproduction, and substrate digestion. Many fungi also recycle their own biomass to fuel further growth. Within this overall framework, each fungal species adopts a different strategy, depending on the relative investment in growth, recycling, digestion and reproduction. Collectively, these strategies determine ecologically critical rates of carbon and nutrient cycling, including rates of decomposition and CO2 release. Crucially, a given fungus will encounter more of a resource if it increases its growth rate, and it will obtain energy from that resource more rapidly if it increases its investment in transporters and digestive enzymes. However, any energy that is expended on growth or resource acquisition cannot be spent on spore production, so fungi necessarily confront trade-offs between these three essential processes.
To understand these trade-offs we developed an energy budget model which uses a common energy currency to systematically explore how different rates of growth, recycling, and investments in resource acquisition affect the amount of energy available for reproduction, and how those trade-offs are affected by characteristics of the resource environment. Our model helps to explain the complex range of strategies adopted by various fungi. In particular, it shows that recycling is only beneficial for fungi growing on recalcitrant, nutrient-poor substrates, and that when the timescale of reproduction is large compared to the time required for the fungus to double in size, the total energy available for reproduction will be maximal when a very small fraction of the energy budget is spent on reproduction. You can read about this free under the title "Energetic Constraints on Fungal Growth" and it appears in the glamorously titled American Naturalist. Luke, Mark and Nick
at January 10, 2016 No comments: