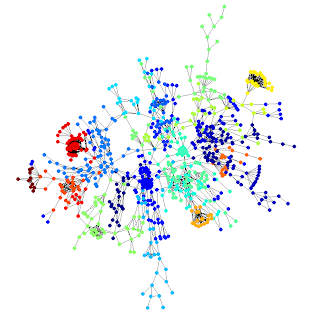 Proteins are perhaps the major building blocks of the cell. They come in many different shapes and sizes, and they can join together (a bit like lego) to make all sorts of useful structures. There are ways to come up with simple representations of such systems: one way of doing this is to think of them as networks (like we have computer networks, or railway networks, or facebook networks). Displayed is a picture of a network of proteins; two proteins are joined if they interact (stick to each other). The different colours are different 'communities' of proteins. A community is just a group of proteins that interact a lot more amongst themselves than they do with outsiders. However, this picture isn't complete, because it's static. Cells are dynamic; they have a life-cycle, just like us, and they go through different stages: growing, dividing, dying. We are often interested in understanding what drives these changes; for instance, cancer happens when the growing and dividing stages go into overdrive. What is happening to the protein network as the cell goes through its different stages? At each stage, only part of the network is 'switched on'; the cell is making only those proteins needed for that stage. Imagine different parts of the network lighting up at different times. If we take this into account, can it help us to better understand what roles the different proteins are playing in the great cellular drama?
One interesting idea, suggested some years ago, was that if we focus on the seemingly important proteins, the ones that have many interactions (called 'hubs'), maybe by looking at when these interactions light up we can say something about what kind of protein it is. Supposing I am a hub protein in the network, with lots of partners. There could be two opposing scenarios: maybe all my partners get produced by the cell at the same time, and so all the interactions happen at once. In this case, it's like a big party; so I would be called a 'party hub'. On the other hand, it could be that my partners get switched on at different times (or places). In this case, my interactions happen one by one, like a sequence of dates, and so I would be called a 'date hub'. The idea that hubs came in two flavours, date and party, was quite exciting, because the two types seemed to have important roles in organising the whole network. Party hubs were like local coordinators: they helped to bring together many proteins with the same purpose. Date hubs were global organisers; they communicated between different parts of the network. Knowledge of what specific date and party hubs were doing could be a major step forward in understanding how the complicated protein cocktail produces specific kinds of cell behaviours.
Unfortunately, things turn out be not so simple. Several people disputed the idea that 'date' and 'party' hubs really existed, presenting evidence (e.g. here and here, noting this response and this article and noting, in fact, that this literature moves fast!) that there was no consistent relationship between the pattern in which the interactions light up and the protein's role in organising the network. Despite this the idea remained in vogue. In our recent article "Revisiting Date and Party Hubs: Novel Approaches to Role Assignment in Protein Interaction Networks" free in PLoS Computational Biology we suggest that, based on their patterns of connections to different protein communities, that the so-called date hubs (as defined) are not really any more likely to be global network coordinators than the party hubs. Moreover, protein hubs display a wide variety of 'lighting up' patterns for their interactions, and classifying them into just these two types is perhaps not carving nature it its joints.
It is not all bad news, however. So far, we have been thinking about roles for individual proteins. But what if we instead focus on interactions between proteins? In other words, what if we try to assign roles to the lines in the network, rather than the dots? Imagine that the lines are roads, joining up a bunch of cities. If I want to drive from one city to another, I will try to find the shortest path between them. Now, suppose we remove one of the lines; one road suddenly gets destroyed. How many of those shortest paths between cities have to be re-routed? If the answer is lots, then it means that the link we removed was important to efficiently connecting up the network. So, for each link, one way of measuring its importance is how many paths have to be re-rerouted if it's removed: this is called a betweenness. How is this betweenness relevant to the network of proteins? We found that the betweennness of a link is strongly related to the similarity of the two proteins joined by that link: the links with the highest betweenness tend to be interactions joining the most dissimilar proteins. This partly seems to mirror something observed in social networks, where a distinction can be made between 'weak' ties (or links) and 'strong' ties. Strong ties are close relations or friends; weak ties may be less familiar, or similar, acquaintances. 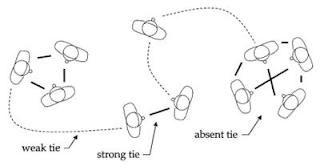 We might imagine weak ties are important for communicating information across the network: for example, if you are looking for a job, it seems more likely that someone like a friend's colleague will be able to provide a useful tip than someone whom you know very well. Coming back to protein networks, if we think of betweenness as a way of measuring a link's importance for information flows between proteins, then our results indicate that here too the most important links are 'weak', in the sense that they are between dissimilar proteins that have different functions and are not part of the same group. This suggests that a deeper understanding of the roles played by specific links may help us to unravel the tangled webs of proteins that control and comprise cells, and thus ultimately, life itself. Sumeet and Nick. You can find a longer version of this article on Sumeet's blog.
at June 11, 2011